These are boom times for economics—Oxy’s biggest major for the last 19 years. As two popular professors prepare to retire, how will the department evolve?

While visiting Oxy as a high school senior, Peter Adamson ’84 sat in on a lecture by second-year faculty member Robby Moore. It was Adamson’s first time in a college classroom, and Moore “made a big impression on me,” he says. “I wanted to go to a liberal arts college and be able to work closely with professors rather than a UC school with massive class sizes, so that was an important reason why I went to Occidental.”

“I had a great experience with the econ department,” adds Adamson, the former chief investment manager for Oprah Winfrey’s management company and current chief investment officer for the SFE Group, whose mission is to lead positive systemic change that strengthens Los Angeles communities. His primary influences were Moore and A.H. “Woody” Studenmund, who joined the College in 1970 and recently became Oxy’s longest-serving faculty member. “Woody was very instrumental in my early career, but the whole group was strong.”

“Woody and I had the same goals,” says Moore, who met his colleague of the last 40 years when Studenmund was on leave in Cambridge, Mass., in 1978 and Moore, a Pomona graduate, was an assistant professor of economics at Harvard, having completed his Ph.D. there a couple of years earlier. “We wanted the best teaching department we could get. We wanted people who were still doing high-quality research, but we wanted the best teaching economists we could find.”

“Some of our most accomplished graduates have come out of the economics department,” says President Jonathan Veitch, “and to a person they attribute their education in economics—and especially their mentorship by Woody and Robby—as the foundation for their success.”

“Economics can be a springboard for many different types of careers after Oxy,” says professor and department chair Lesley Chiou, who has taught at the College since 2005. For the last 19 years, economics has been Oxy’s most popular major. Out of 590 degrees awarded to the Class of 2018, 85 were in economics—an all-time high.

Today, out of 10 tenure-track economists, “We’re 50 percent female, and we’re 50 percent nonwhite,” says professor Kirsten Wandschneider, who arrived at Occidental in 2007 and just completed a three-year term as department chair. “It’s the culture of the department that makes people want to spend their careers here. Robby and Woody have strengthened and fostered that environment, and it’s been really transformative.”

That diversity extends to the curriculum as well. “Many of us work in areas that were unknown or did not exist 30 years ago,” says Chiou, who specializes in industrial organization and applied econometrics, including Internet economics. “One of the goals of the department is to partner with other departments on campus to bring interdisciplinary programs and opportunities to our students,” she adds—a notion that Studenmund fully endorses: “We wouldn’t be as strong as we are if it weren’t for the rest of the College helping our students become well rounded and intellectually diverse.”

Wandschneider’s research areas include European monetary and financial history, international macroeconomics, and the development of financial institutions and markets. She encourages Oxy students to think about economics as a social science: “How does the individual interact with society? How do we make choices? How do we allocate resources? These are very basic economic questions and we want students to see that there are really broad applications.”

The expanding terrain of economics is a hot topic for associate professor Bevin Ashenmiller, an environmental economist whose research spotlights recycling, evaluation of environmental programs, and energy and climate policy. “One of the things that I really focus on with my students is that the tools of economics can be very valuable across lots of different fields and lots of different topics of interest,” says Ashenmiller, who wants to show students that economics isn’t necessarily what they took in AP econ during high school.

Ashenmiller—who served as a senior economist with the White House Council of Economic Advisers in 2012-13—teaches Econ 101 as part of Oxy’s California Environment Semester, a program for first-years in partnership with geology professor Margi Rusmore and biology professor Gretchen North. “We spend four days in Yosemite and three days on the California coast and three days in Death Valley, and students get to do all these really cool things,” she says. Her goal is to strengthen “their knowledge and understanding of what it is that economists can do and what an economist looks like.

“Economists are not any particular demographic,” she continues. “They’re really amazing people who come from all kinds of different backgrounds. Because we are part of a liberal arts college, we are able to create these interdisciplinary opportunities for students that can become life-changing experiences.”

As an undergraduate at Oxy, Ken Smutny ’08 remembers “traveling to Guatemala on an Anderson grant and doing research on microfinance programs and business education programs for women.” Today he is head of U.S. marketplace display ads sales and programmatic sales for the United States, Europe, and Japan at Amazon. “On a Schwartz grant I was sent to Montana to learn about property rights, and those lessons still stay with me today.”

Of all of his professors at Oxy, former economics professor Giorgio Secondi was the biggest influence on Smutny. “He, more than anybody, helped me learn to write, and that was in my freshman Core class. The lessons that he gave me, I still share with my team today.”

A recipient of both the Donald R. Loftsgordon Memorial Award for Outstanding Teaching and the Linda and Tod White Teaching Prize, Secondi left Occidental for Phillips Exeter Academy in 2008 in large part because he was “a bit frustrated by the size of the classes [up to 35 students] that I taught … small for a college, but still big,” he said in a 2013 interview.

“I think over time we asked too much of our econ faculty,” Moore says. “Different people leave for different reasons, but we had to work awfully hard with much higher enrollments.”

“We don’t want to become so attractive to the students that we can’t meet their needs educationally,” Studenmund says. “We have had to make some compromises in terms of our program because we couldn’t do it for all our students.” To that end, the department dropped a senior thesis from its requirements for graduation, although “in some perfect world we would like to require it again,” he adds.

Another area the faculty hopes to address is the ratio of male to female students—roughly 2-to-1, which mirrors the national average. Students of color and first-generation students are similarly underrepresented, and Wandschneider and associate professor Mary Lopez have been involved with a group of undergraduate liberal arts colleagues across the nation that is thinking about diversity and economics and how to change the student experience.

“We would like to get the message across that econ is for everybody,” Wandschneider says. “When I was a student of economics, I had to just push through. And I would like a more diverse group of students to know that they can find a home in economics the way I have found a home as a faculty member in this department.

“Economics as a profession has changed,” she adds. “So I think we need continuous curricular innovation, building on the foundations of active learning that especially Robby has spearheaded in the department. We need more opportunities for high-impact research practices where we get one-on-one time with students, or one faculty member with a small group of students. This is where the field is moving—including more quantitative and more computing skills—and the more we can do with students in this area, the better we prepare them to move on.”

Moore reflects upon his upcoming retirement in May 2019. “I feel like I’ve done a lot of what I wanted to do at Oxy. Retirement gives you a chance to mull over and invent a new life, which is a challenge and something I’m looking forward to. But I feel like we’re leaving the department in great shape and they’re going to do great things.”

“Robby and Woody have literally given us a lifetime of service and dedication,” says Chiou, who notes that she was born in 1978—the year Moore began teaching at Oxy. “We will build upon their contributions and our trajectory to lead the department forward.”

“We all have different strengths and interests and specializations, but we all work for the same goal—to create opportunities for the students, to teach and engage them, and to turn them into critically thinking economic citizens,” Wandschneider adds. “I think that’s the beauty of it.” 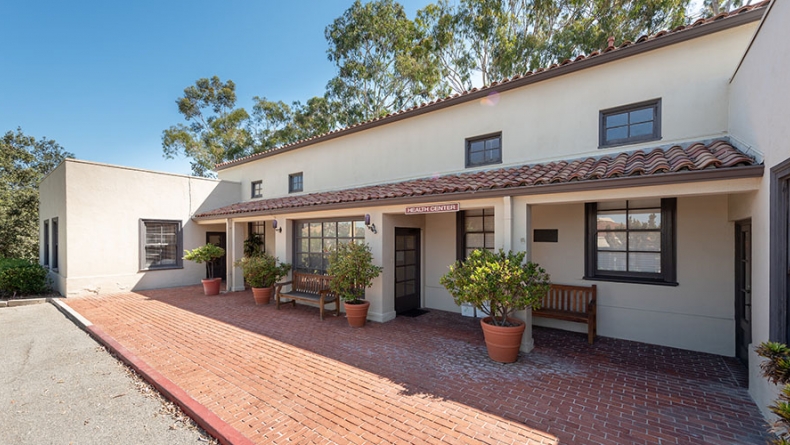