Like many first-generation students, Alison (Tattersall) Hawkins ’87 was unsure of herself, and struggled during her first year at Oxy. 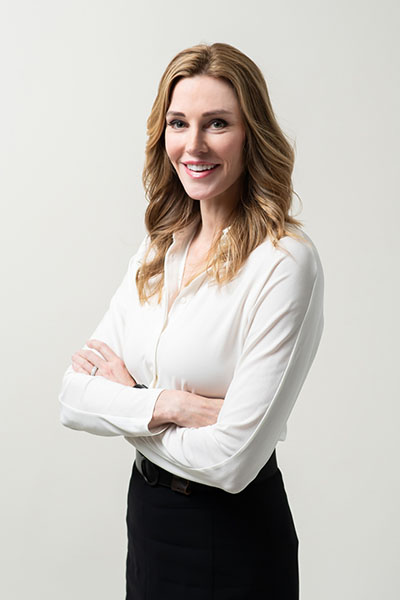 The daughter of working-class British immigrants who came to America after World War II—her father left school at 14 to become an apprentice carpenter, eventually becoming a civil engineer—Hawkins had little idea of what to expect at college.

“Oxy was so formative for me. The accessibility and proactivity of the faculty and advisors was truly remarkable. They listened and tried to help. They really cared about my development, academically and as a person,” says the Occidental trustee and managing principal of Artemis Real Estate Partners, the pioneering majority women-owned commercial real estate investment management firm. “I was painfully shy as a freshman, but even I couldn’t hide at Oxy–they care about every student. For me, my Oxy education–my Oxy experience–made all the difference.”

Thinking it would impress her father, who didn’t believe girls should go to college, Hawkins began her freshman year by focusing on chemistry and math, until her advisor took her aside and reminded her that Oxy is a liberal arts institution–and recommended that she try other subjects. The Orange County native ended up a double major in English and psychology. “It was so important to get that guidance early on–it was almost an academic intervention—and to have my advisor actively foster my success.”

A memorable class, Introduction to American Legal Systems, participation on the debate team and a meeting set up by a friend set her on the road to law school. “My friend had attorneys in the family, and he said, ‘You remind me of them—you like to read, write and argue. Why don’t you talk to my cousin who’s a lawyer?’” Hawkins recalls. “I didn’t realize it at the time, but it was truly my 'aha' moment.”

After graduation, Hawkins flourished at American University Washington College of Law. “I did well in law school,” she says. “It’s about reading, analyzing, and writing, and with my Oxy education I was well-prepared.” She spent nine years litigating securities fraud cases, ultimately making partner before deciding she was ready for a change. She earned her MBA at the Wharton School and went into commercial real estate, a field in which she had long held an interest.

Once again, her Oxy skills stood her in good stead. “I started out in brokerage, where clients are focused on cash flows and valuation, but you also create these attractive books–called offering memoranda–about the buildings you’re selling,” she says. “As a new associate, my way of joining the team was to help with the writing, even if I wasn’t actually assigned to a deal.”

In 2010, Hawkins was recruited by Artemis, then less than a year old, to run its capital raising operation. Apart from a two-year hiatus at another firm, she has been there ever since, playing a major role in raising the more than $4.7 billion in institutional capital the firm has attracted. In addition to being woman-owned, Artemis is a diverse firm: nearly 50% of the team are minorities and/or women. Several years ago, the firm created its Summer Enrichment Program, which provides a summer internship experience for rising college sophomores. “The goal of the program is to introduce young people to commercial real estate as a career who otherwise wouldn’t think of it, in a small, diverse group,” she says. “Of course, there are some Oxy students in the mix.”

Hawkins’ concern for Oxy students goes beyond increasing their access to internships. She recently made a multi-year pledge to the Oxy Fund and a major, unrestricted estate gift to the College. “Oxy is an incredible place that had a transformative impact on me,” she says. “I feel very lucky. It is essential that Oxy continue to benefit students for generations to come."