Every pair of socks sold equals one pair given to someone in need by Bombas, the business Andrew Heath and his younger brother, David, established in 2013 with partners Randy Goldberg and Aaron Wolk.

A Salvation Army posting on Facebook—that socks are the most requested item at its homeless shelters—inspired the Heaths back in 2011 to build their company.

The two had talked about going into business together as far back as high school, realizing they had complementary skill sets. So they created their business plan, spent two years researching how the perfect pair of socks should fit, and then launched Bombas on the crowdfunding site Indiegogo with $150,000 in presales.

Bombas finished its first year with revenues of $1.8 million. Now, by the end of its fourth year, Heath pro­jects close to $50 million in sales. Bombas works with 750 giving partners across all 50 states to distribute the socks it donates.

While Heath says he’s done everything from IT to janitorial work, most of his days are focused on accounting and­ ­financial analysis along with ensuring shipments are correct and on time. He oversees Bombas’ Customer Happiness Team, an in-house group that includes recent hire Ella Inman ’16, an economics major from Sturgis, Mich.

“Even in my short interactions with him I can tell he has the grit and perseverance to be a successful entrepreneur,” Inman says. “I’m really excited to work with a fellow Oxy graduate, and I know he has helped create a great company with a wonderful culture that is truly making an impact.”

Inman is one of 40 Bombas employees today, up dramatically from just 15 this time last year. Heath credits much of the company’s growth to word-of-mouth. He says that customers talk not only about the socks’ quality—“They’re the most comfortable socks you’ll ever own”—but also about the difference Bombas makes to those in need. 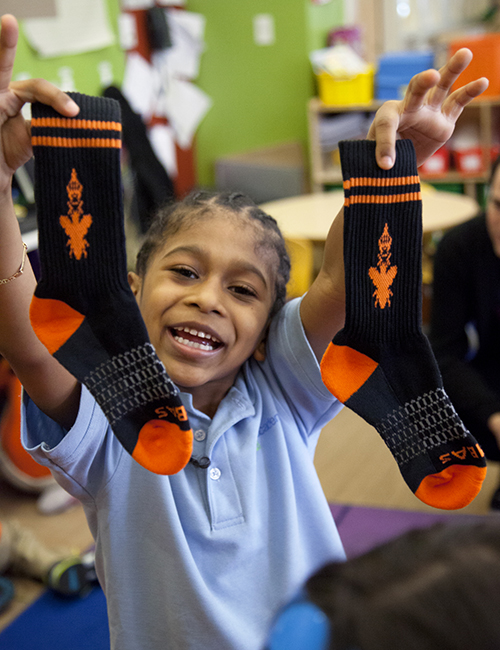 People talk about us,” he says. “When’s the last time you went to a dinner party and talked about your socks? Never, right?”

That’s because of the company philosophy: “Bee better.” Bombas is a Latin derivation of the word bumblebee. Bees, Heath explains, are altruistic by nature, each one working toward the greater good of the hive, each one contributing to something bigger and better than any individual could do alone.

Former Oxy assistant professor of economics Jerry McIntyre, who now teaches at New York University, remembers Heath’s leadership and courage in class discussions. “Andrew was always the first to respond to questions or volunteer for giving presentations,” he recalls. “And he wasn’t afraid to challenge the accepted perspective, especially when it came to moral behavior.”

Heath also serves on the board of the New York chapter of Back on My Feet, an organization that helps homeless people overcome their situation through a commitment to running. The program boasts a 90 percent success rate, and to support the organization, Bombas donates office space for its use. Heath also ran in a marathon as part of a Back on My Feet fundraiser. Of course, he was wearing Bombas socks—neon yellow calf-height ones. (He normally wears black-and-white quarters with shorts, though.)

Heath has too many pairs to choose a favorite, but he did admit one disappointing thing about Bombas socks. Despite having done two years of research and development to create the perfect sock for their customers, the brothers still haven’t solved the chief complaint among sock owners—they still get lost in the dryer. Heath and his team will have to keep working on that.

In recognition of his entrepreneurship and ethical business model, the Board of Governors is proud to name Andrew Heath ’04 as a 2019 Alumni Seal Award recipient for Professional Achievement.