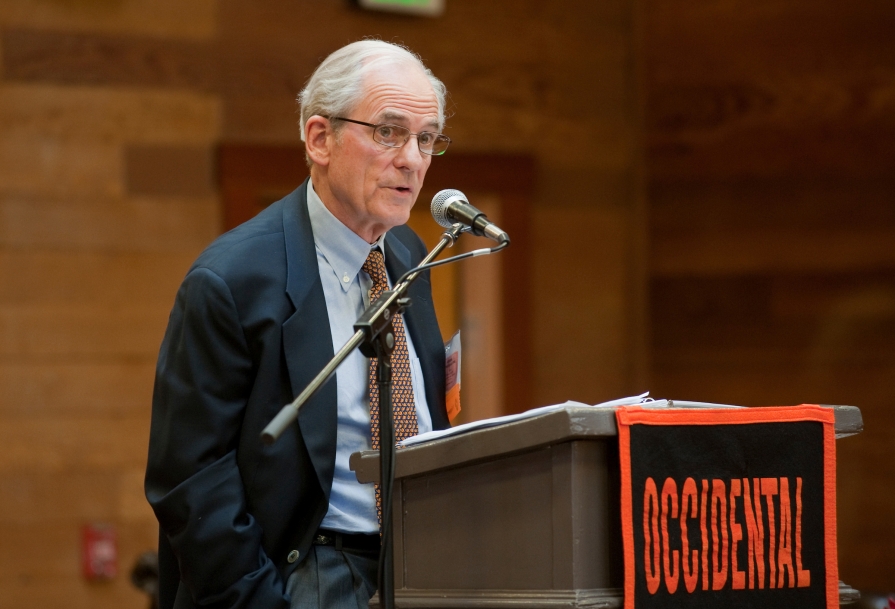 When John Power arrived on the Oxy campus in the fall of 1954, he had no idea what he wanted to do with his life. Nor did the Eagle Scout from Eagle Rock High School really know what to expect: his father, a dentist, and his older brother were the only people in his family who had ever gone to college. He had no idea his life was about to change.

“Like so many others I know, my education at Oxy was transformative in many ways—intellectually and in terms of my personal interests, socially, the way it expanded the breadth of my curiosity, and in so many other ways,” says the retired partner in the Los Angeles-based international law firm of O’Melveny & Myers. “It was a major factor in my growing up.”

One of the major change agents for Power was Raymond McKelvey, the disheveled yet brilliant political science professor who intimidated his classes with his insistence on academic rigor and lengthy papers—and at the same time went out of his way for his students. It was McKelvey who told Power about the scholarship that paid his way through law school at NYU, and who introduced him to Maynard Toll, then one of the senior partners at O’Melveny. “He was that kind of guy,” says Power, who majored in political science. “He stood up for his students, and he did a lot of things for me.”

After graduating Phi Beta Kappa from Oxy and serving on the NYU law review, Power joined O’Melveny, one of Los Angeles’ oldest and most prestigious law firms. A specialist in corporate law, he served as resident partner in the Paris office and later coordinated the firm’s international practice back in L.A. An active and engaged Oxy alumnus, he is one of the few—if not the only—Oxy graduates who has served as ASOC president, president of the Alumni Board of Governors, and chair of the Occidental Board of Trustees. (His first leadership role on campus was as a freshman when he and classmate Dick Chilcott were tapped to head the effort to build and provide security for the annual Pomona bonfire.)

Despite that remarkable record of service, Power felt that there was still more that he could do for his alma mater. That’s why he recently endowed the John B. Power ’58 Endowed Merit Scholarship Fund. A portion of his gift will be matched by The Edgerton-Occidental Merit Scholarship Challenge, which creates new merit scholarships that make it possible for Oxy to better compete with the University of California for high-achieving middle-income students from the Golden State. (Power also wanted to honor Jonathan Veitch as he stepped down after 11 years as Oxy's president.)

“I am deeply interested in, and concerned with, the need to attract the best and brightest students, and I wanted to do something to provide incentives for the best students to come to Oxy,” says Power, whose law school expenses were paid by a merit scholarship. “I don’t have the giving capacity that some others have, but I wanted to do something in gratitude to the College for all that it has done for me.”