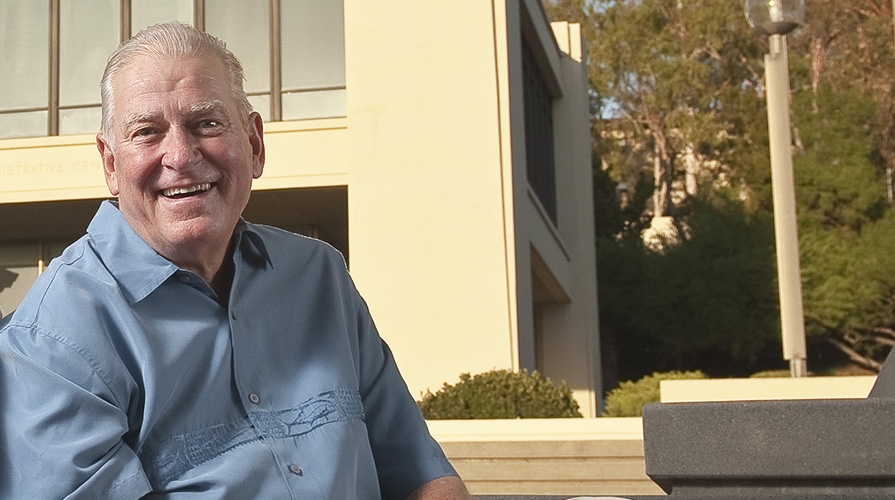 When Larry Layne ’71 was a student at San Fernando Middle School, his P.E. instructor was a guy with a Marine Corps haircut named Jim Mora ’57.

“Sometimes he would forget that we were 12 or 13—he thought he was talking to a bunch of Marines in base camp,” Layne recalls with a laugh. But if you did well enough in his class, Mora would rent a bus to take students to watch him coach football at Oxy.

As a high school senior, Layne applied to both Stanford and Oxy, but ultimately decided he would have a better chance of playing more football for the Tigers. In doing so, he followed in the footsteps of his father, Howard Layne ’45, who met his future wife, Beth Odell ’46, when they were students. (They were married in 1945.)

Layne lost his mother in January 2017, followed by his father just 11 months later. When word reached Howard and Larry of the cancellation of the 2017 season, both father and son made generous gifts in an effort to save the football program. Larry subsequently expanded his commitment to the College with a five-year pledge—joining dozens of others in supporting Oxy football’s rebuilding efforts.

“All the guys I played with ended up being pretty successful in whatever path in life they picked,” says Layne, who was a linebacker for the Tigers and later became a real estate developer and property manager in the Los Angeles area. “There is just something different about the football experience here.”