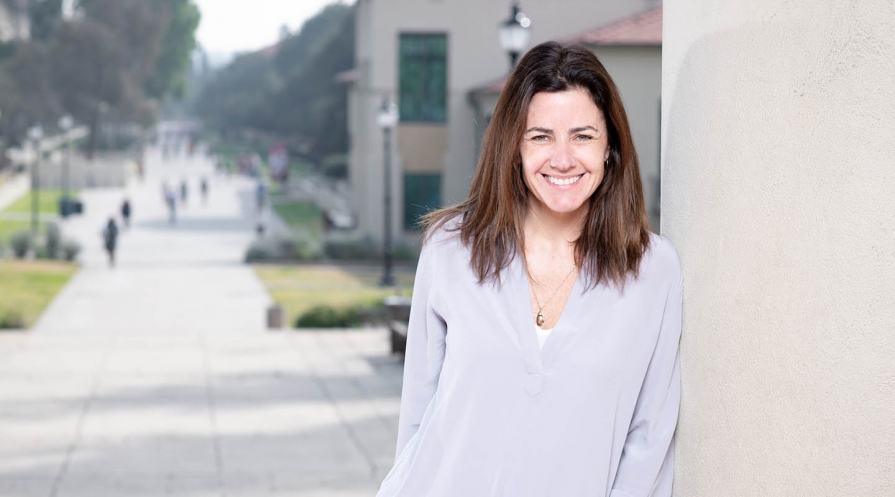 Lindsey Collins says she was predestined to attend Occidental.

She is the daughter of Dennis Collins, former admission director and dean of students, Her mother, Mollie, also worked in the admission office. There was no getting away from Oxy enthusiasm in the Collins home.

“My dad said, ‘We’re going to Occidental College,’ and I was like, ‘Dad, you do know you’re not coming?’” Lindsey Collins says.

It didn’t take long for the younger Collins to make a name for herself. A diplomacy and world affairs major, she joined Pixar in 1997, where she co-produced the hit animated feature WALL-E, for which she was awarded an Outstanding Animation in an Animated Picture Award by the Visual Effects Society.

Collins also has worked on Finding Nemo, Toy Story 2, and A Bug’s Life. In addition to her producing duties, she’s vice president of development and new media at Pixar.

“And no, I did not know that’s where I was going to end up when I studied at Oxy,” says Collins, who never took a film course at the College. “People at Pixar say that’s probably what makes me a good producer—that I haven’t studied film my whole life. I bring a different perspective to it. I like to say, ‘It’s probably the liberal arts perspective.’”

Immediately after graduation, Collins worked in Disney animation, where she collaborated on films including Pocahontas, The Hunchback of Notre Dame, and Hercules. These days, in the midst of calls for Hollywood to reflect more diversity, Collins is doing her part toward those ends. At Pixar, she helped launch Sparkshorts in January. The short animated pieces, which can be viewed on YouTube, are meant to highlight diversity and inclusion.

“It was figuring out how to create a program in Pixar that allowed it to take risks on individual filmmakers and some of their stories,” Collins says. “Those are just now starting to get out into the world, so it’s exciting.”

In the high-stakes world of filmmaking, which Collins calls “inherently chaotic,” there are those who leave the profession because they lack big-picture thinking skills. That requirement keeps Collins coming back. She learned to take risks—well-considered risks—during her time at Oxy.

“What I really love about my work is coming into a job every day that isn’t clear cut,” she says. “There isn’t a right or wrong answer, and I love that. I’m much more of a creative, intuitive discussion- and debate-based person. Occidental, and certainly a liberal arts education, completely encourages that. That’s the biggest gift I’ve taken from Occidental. Creativity can’t exist without critical and liberal arts-style thinking and debate.”

While filmmaking never seemed like a possibility when she entered the College, it in many ways isn’t surprising that Collins landed in Hollywood.

“Occidental teaches the value of a story,” she says. “Whether it’s philosophy, or diplomacy, or English, you’re taught to empathize and see a different side of something. The best characters in our movies are nuanced, and yet there’s a common truth to them. Liberal arts thinking—or storytelling—is at the core of it.”