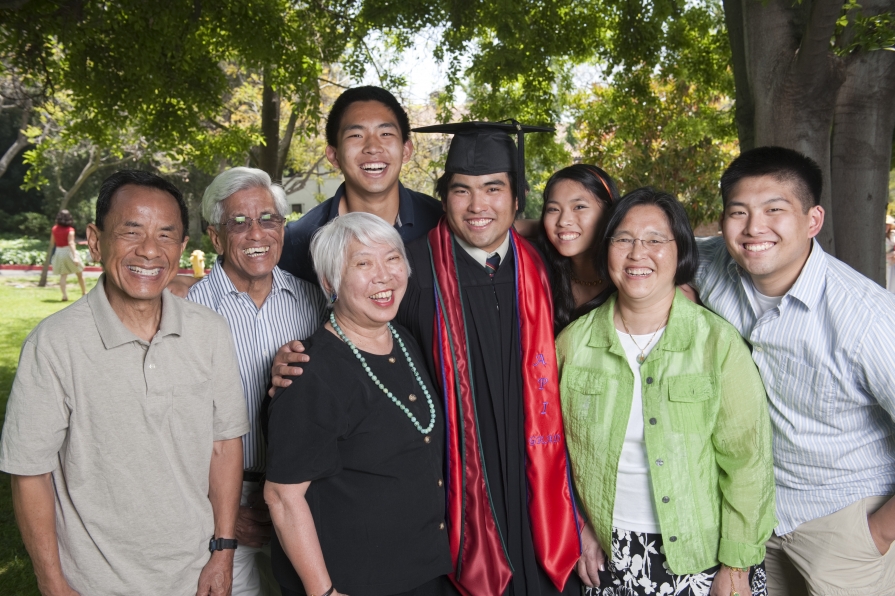 Nick Lee ’10 was a familiar voice to thousands in the Oxy community during his time as a Telefund caller.

An economics for business and management major, Nick personally raised over $220,000 cold-calling alumni, parents, and past parents on behalf of the College. “Whenever he’d come back from a shift, he’d be so jazzed about it,” recalls Noah Goldsmith ’10. “He loved talking to people about their Oxy experience and sharing his.”

Noah met Nick on the first day of Oxy’s Multicultural Summer Institute, prior to the start of college. “We were roommates, and for the whole month, Nick had just one pile of dirty clothes. I was very much the same, and I thought, ‘We’re going to get along’—like we were two peas in a pod,” Noah recalls with a smile.

They were roommates again as first-years, sharing a triple in Haines Annex with a third roommate. If Nick wasn't returning to Portland, Ore. for the holidays, he’d often celebrate with Noah’s family, who lived locally. In his visits, Nick especially connected with Noah’s mom, who worked in nonprofit fundraising. They reveled in their mutual passion for helping others and Nick even solicited her advice about starting his own nonprofit one day.

Nick’s older brother, Chris, almost went to Occidental himself. “Growing up, Nick and I shared a room for 10 or 11 years as kids. We’d be super tight one minute and then just fighting the next,” he says with a laugh.

In high school, Chris adds, “Nick was always pretty smart but a bit of a goofball—more motivated to hang out with friends and family than do his schoolwork. When he came home after his first semester at Oxy, he seemed like a totally different person—still wanting to have fun but with goals and direction.”

Nick moved to the Bay Area after graduating from Oxy, where he had an impressive career in the tech industry. As a senior account executive with Distil Networks, he was the company’s top sales rep in 2017, and Nick became a principal account executive at Wallarm in October 2018.

Nick passed away unexpectedly on Aug. 24, 2019. Shortly after his passing, friends and family gathered in San Francisco to remember Nick. They began kicking around the idea of a memorial to Nick at Oxy. Following a series of conversations with the College, they created a financial aid fund, with a five-year goal of $100,000 to fully endow it.

“We knew Nick loved Oxy,” Noah says. “In his room in San Francisco, Nick literally had a dozen Tiger hats. Who has a dozen Tiger hats? That kind of encapsulates Nick’s connection to the College. He was always talking about Oxy and spreading the good word about it.”

Fueled by a big turnout by the Class of 2010 during Day for Oxy last April, the Nick Lee '10 Endowed Financial Aid Fund has raised over $57,000 toward its $100,000 goal. “In terms of participation, we were the most active class,” Noah says. “There were so many people out there who had fond memories of Nick and Oxy.” (Three of his fellow Telefund callers even made five-year commitments to Nick’s fund.)

Should the fund exceed its goal by $10,000, “We’d like to do some type of physical memorial, like a bench on the Quad,” Chris says. “Nick had such a good experience at Oxy, and hopefully this scholarship will be able to give that to future generations of students.”

“When I think about Nick, Oxy was a major turning point in his life,” he adds. “Maybe he didn't even notice it that way, but it definitely leveled up his game.”