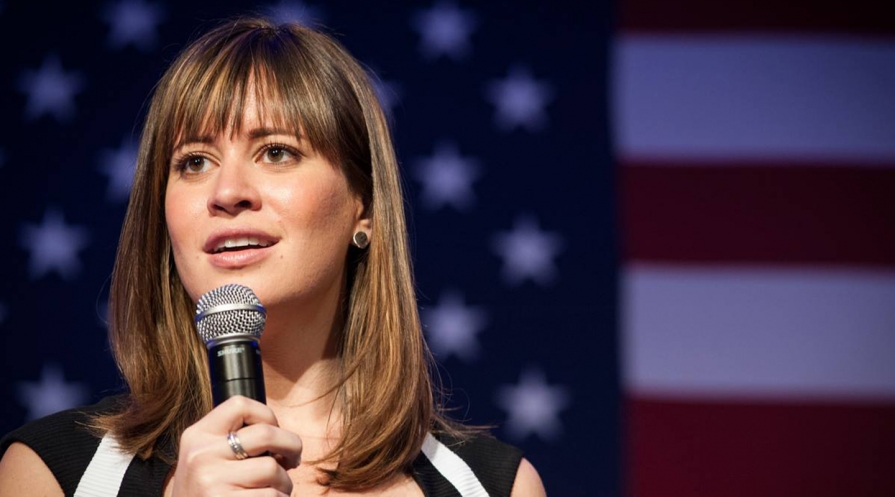 Sara El-Amine joined Obama’s first presidential election campaign at ground zero, working her way up to national director of his 2012 campaign and forging a distinguished political career training tens of thousands of organizers across the country.

It was when The Audacity of Hope met the audacity of youth. Recent graduate Sara El-Amine '07 was contemplating her future and leaning toward law school when a friend loaned her Barack Obama '83's 2006 book. The then-Illinois senator's message immediately inspired the young Muslim-American from Duxbury, Mass., daughter of a Lebanese physician war refugee and an Irish-American mother.

In short order, El-Amine quit her temp job, borrowed a friend's car and drove 1,300 miles to Des Moines, Iowa—headquarters of Obama's first presidential election campaign. Upon arrival, the diplomacy and world affairs major announced that she had studied diplomacy, knew Spanish and was there to volunteer.

A few months later, El-Amine was hired as a field organizer for the Obama campaign, training people how to caucus. Leading up to the general election in 2008, El-Amine organized in Idaho, Mississippi, Texas, Indiana, Colorado and Virginia. "I got hooked on organizing," she says.

After Obama was elected president, El-Amine rose with him. She became the administration's youngest female senior staffer, taking on the role of deputy director of organizational development for the Democratic National Committee. Eventually she was named the first national director of training in American presidential politics, developing curriculum for professionals and volunteers alike.

Organizing has given me the tools to face another person, no matter how different they are from me, and see the beautiful humanity and value in them and the similarities between us."

"The curriculum that we built is now used in thousands of progressive organizations across the country,” she says. “And all those organizers taken it with them and made it their own—it's trained a whole new generation of organizers."

El-Amine served as national director of Obama's reelection campaign, and following his victory in 2012, she was named executive director of Organizing for America, training tens of thousands of organizers across the United States. "We fought on gun control and immigration reform, and we successfully implemented the first enrollment period for Obamacare," she says. "We tracked minimum wage, successfully passed marriage equality, and passed new regulations on climate change at the state level."

She looks back on her Occidental education fondly, remembering impactful professors and perspective-shifting opportunities like Oxy’s Kahane United Nations program in New York City. She was also a featured speaker at the College’s 2018 graduation ceremony.

"Oxy gave me incredible, diverse, critical-thinker friends; professors whom I am in touch with to this day; a strong, disciplinary framework in diplomacy and world affairs and econ; and polished writing skills.

"Organizing has given me the tools to face another person, no matter how different they are from me, and see the beautiful humanity and value in them and the similarities between us," she adds. "Organizing teaches you that with 80 percent of the public, if you meaningfully engage people, smile and listen with an open heart, there's really nothing you can't do and there's no group of people you can't unite around some shared mission or some shared set of values. And from that a set of actions."